Baltimore County Executive Johnny Olszewski Jr. reversed course this week to support a plan to replace Towson and Dulaney high schools, citing an extra infusion of cash from the state.

The reversal comes after Olszewski faced intense criticism in recent months from Towson and Dulaney advocates for backing a consultant’s controversial 15-year plan that called for renovation — not replacement — of the two high aging schools. Olszewski, a former county teacher who taught for a time out of temporary trailers, campaigned on a platform of addressing overcrowding and critical school construction needs.

Towson and Dulaney’s construction needs have long been a source of heated debate in Baltimore County. Parents and advocates have complained for years about burst pipes, dilapidated conditions or overcrowding at the two schools. Some critics said the county executive was failing to make good on campaign promises to prioritize capital improvements for the schools.

Now, Olszewski wrote in a letter to the Interagency Commission on School Construction, the county expects $42 million more in funding than originally anticipated through the state’s Built to Learn Act, which the state legislature passed in 2020 to help counties that are struggling to keep up with repairs for aging school buildings.

And the county’s share of school construction dollars earmarked in Gov. Larry Hogan’s proposed 2023 capital budget, as well as $23 million from the Healthy School Facility Fund, will provide revenue for financing rebuilding the two high schools, according to the letter delivered Tuesday.

“I’ve never been more encouraged about where we are with school construction in Baltimore County in my life,” Olszewski said in an interview this week. 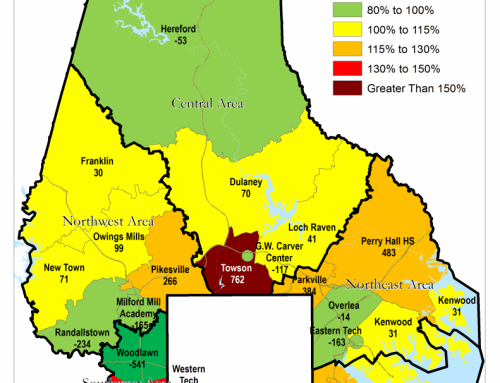