The neighbors of the Chabad House of Towson are victimized once again. – InsideOutsights

Home/Development, Press/The neighbors of the Chabad House of Towson are victimized once again. – InsideOutsights
Previous Next

The neighbors of the Chabad House of Towson are victimized once again. – InsideOutsights 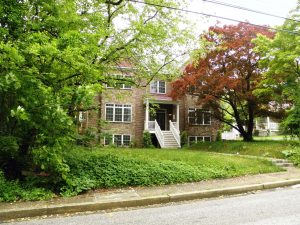 Well, it looks like the neighbors of the Chabad House of Towson and Goucher in Towson are being victimized again, this time by accusations of religious prejudice for pursuing their legal remedies to have the 6,614 square-foot community center torn down. The accusations, attributed to a group called Friends of Towson Chabad, were reported last week in a front-page story in the Baltimore Sun captioned “Jewish group in Towson claims court order to raze Chabad center is case of religious discrimination.”

The Chabad House is a Jewish community center located about a block from the Towson University campus in a residential subdivision of Baltimore County known as Aigburth Manor. Rabbi Menachem Rivkin directs the center on behalf of the Chabad-Lubavitch movement. The deed to the property describes the owner as Friends of Lubavitch, Inc.

In 2017, the Circuit Court for Baltimore County held that the building located at 14 Aigburth Road violated private setback covenants applicable to the property and would have to be razed as a result of a suit brought by neighbors and the Aigburth Manor community association. The required building setback is 115 feet from the road and the structure is less than 60 feet from the road. The county is not a party to the case.

In a separate case in 2017, the Baltimore County Board of Appeals ruled that the building permit for the structure had been procured “dishonestly.” The county did nothing about the unlawful structure as a result of the board’s decision, an inexplicable failure to act discussed below. The board’s decision, however, has no direct bearing on the legal action brought by the neighbors to enforce the private covenants.

The Board of Appeals held that Friends of Lubavitch had “acted in bad faith” by misrepresenting the purpose of the structure on the permit application as a “residential” addition to an existing 2,200 square-foot home occupied by Rabbi Rivkin. Rabbi Rivkin, who according to the Sun currently is expecting his sixth child, claimed that the 6,614 square-foot addition was necessary to accommodate his expanding family.

The Board of Appeals found that, from the beginning, the purpose of the building was to serve as a community center, a use not permitted as a matter of right under the zoning applicable to the property. The Board concluded that the permit therefore had been obtained by deception and misrepresentation.

In its opinion, the Board of Appeals referred to the testimony of the owner of the neighboring property, Robin Zoll. According to Mrs. Zoll, when she confronted Rabbi Rivkin about the manner in which the building permit had been obtained his response was: “I was as honest as I could be to get my permit.” The board called it a “stunning admission.”

In summary, Friends of Lubavitch, Inc. obtained the building permit for the structure in 2016 through what the Board of Appeals deemed to be misrepresentation and dishonesty. As if that wasn’t enough, Friends of Lubavitch built the community center in 2017 in violation of private covenants applicable to the property, effectively forcing the neighbors to act because the county had not.

Read full article (it’s a long read, but worth it): The neighbors of the Chabad House of Towson are victimized once again. – InsideOutsights